Doctor Who Guide to Comedians

While Doctor Who is famous for inviting comedian guest stars onto the show (i.e. Mitchell and Webb playing the voices of the robots on “Dinosaurs on the Spaceship”), how many of the comedians are actually standup comics? Let’s have a look at some of our favorite standups who’ve appeared in recent years of Doctor Who.

Did you recognize comedian Rufus Hound as the banter-loving crook Sam Swift in “The Girl Who Lived?” Hound is a self-confessed Doctor Who fan and appeared on Doctor Who Live when Peter Capaldi was announced as the next Doctor. He’s written on his blog that he was mortified for flubbing up a few comments on the show, such as mistakenly saying “Peter Eccleston” instead of “Christopher Eccleston,” which made people think he knew it was going to be Peter Capaldi behind that curtain when in fact Hound is friends with Chris’ cousin Peter Eccleston.

You can’t tell me you weren’t annoyed at the tease, that Frank Skinner’s “Mummy on the Orient Express” character, Perkins, nearly became a new companion but didn’t. This isn’t the first appearance by the comedian’s comedian in a Doctor Who related project. He also appeared in The Five(ish) Doctors as one of the Dalek operators. Like Hound, he is a fan of Doctor Who. Skinner has been named by many working comedians today as a key influence in their style or in wanting to become a comedian: Lee Mack, Sean Lock, Al Murray, Kevin Bridges…

Check out his standup DVD Man in a Suit, as well as his previous six standup DVDs.

This one’s pretty obvious, as Catherine Tate’s character Donna Noble spent a whole season with the Doctor as his companion. She originally appeared as a guest star, like so many other standups on the show, in the season 3 pilot, but Tate showed her dramatic chops and became one of the best-loved companions of our age. Tate is probably best known for her sketch material, such as her Nan character on The Catherine Tate Show, and who could forget the annoying catchphrase “Am I bovvered?” A lot of these TV sketches originated at live shows, though. Famously, she performed in New Bits, an Edinburgh Fringe Festival live sketch show with Lee Mack and Dan Antopolski (which generated material that became Mack’s sitcom Not Going Out), followed by her own Edinburgh one-woman show the following year. Tate continues with her role as Donna Noble in audio adventures for Big Finish.

Comedian Bill Bailey plays Droxil in the Christmas special “The Doctor, the Widow and the Wardrobe.” Bailey, who frequently appears on television in regular roles like Manny in Black Books or as a team captain on Never Mind the Buzzcocks, is a multi-talented standup comic. When I saw him perform in New York, his standup set contained no less than eleven instruments, from guitars to bicycle horns. He has the rare gift of perfect pitch. I recommend his YouTube channel, which includes standup clips as well as video blogs (from inside a bunker). He has seven standup DVDs, the most recent of which are Dandelion Mind and Qualmpeddler.

Lee Evans, a recent retiree from standup (at the untimely death of Addison Cresswell, Evans decided to quit comedy to spend time with his family), appeared in “Planet of the Dead” as the nerdy scientist Malcolm. Evans is a comedy actor you may recognize from There’s Something About Mary or playing opposite Nathan Lane in Mousehunt, but he is certainly best known for his standup comedy. He gets top millage out of physical comedy and facial expressions. By age 50, he already had nine standup DVDs, the most recent of which is Monsters. It was the most bought Christmas 2014 DVD in the U.K.

“Permission to squee?” How appropriate that Peter Capaldi’s first Doctor Who finale should guest star former co-star Chris Addison? The pair appear together in The Thick of It and big budget film spin-off In the Loop. In Doctor Who, Addison plays SEB, Missy’s computerized right-hand man. Although Addison is doing a fair amount of acting and directing (Veep) these days, he comes from a standup background. His has one live DVD, but also check out his radio sitcoms, TV sitcoms, and his interviews on RHLSTP and on Carpool. 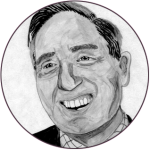 Comedian Michael Smiley plays Col. Morgan Blue in “Into the Dalek.” Cult comedy fans will recognize him from one of his first ever acting roles, as Tyres in Edgar Wright’s Spaced sitcom. Smiley’s own personality, experience as a bike messenger, and standup style dictated Tyres’ personality. But with reoccurring roles in dramas like Luther, Smiley was a good fit for this stoic Doctor Who military character. These days, Smiley is riding his bike for his Ireland travel doc Something to Ride Home About, and starring in lots of movies like The Lobster and Free Fire.

What I still consider one of the best modern Doctor Who episodes, “Love and Monsters,” stars standup Peter Kay as the monster–the Abzorbaloff, going under the human guise of Victor Kennedy, the man who breaks up Elton’s band by absorbing all his friends. Peter Kay has a rich TV history, including his own That Peter Kay Thing, Peter Kay’s Car Share, and Cradle to Grave. Although he took a seven-year break, he is probably best known for his standup comedy, which got him in the Guinness Book of World Records for most tickets sold in a standup tour (1.14 million tickets) in 2013.

Jaime Pond is the editor of Anglonerd.com. She lives and works in NYC. Follow her on Twitter.