If you like psychopaths and con artists (hey, who doesn’t?), this is the show for you. At first, it seems unlikely that a psychopath could get her own hair salon, but when you meet the gullible losers working for Jill Tyrrell (Davis), it starts to make sense. If she can con her way into a marriage, why can’t she con her way into a career?

But her marriage is starting to get in the way of her other cons, so when her hapless husband Terry (Kevin Eldon) is diagnosed with cancer, she’s quick to check him into the hospice, even though he’s cured. She needs him out of the way if she’s going to swoop into Cathy Cole’s (Front) life and steal her husband, Don (Deayton) from her. 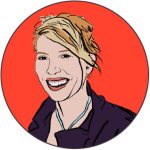 Julia Davis is the writer and star of Nighty Night, as well as Human Remains alongside Rob Brydon. In addition to sitcoms, she’s starred in sketch shows like Jam and Big Train. Her latest project is called Camping.

Don’t make the mistake I made upon watching the first episode: Jill is not the protagonist. You are not required to have any sympathy for her. Like watching a massive pileup on the motorway, it’s horrible to watch her destruction of people’s lives but impossible to look away.

Though there are many excellent actors in Nighty Night–from Mark Gatiss as Jill’s next conned husband Glenn, to Felicity Montague as Cathy’s busty best friend Sue–the real stand-out performance is Gavin & Stacey‘s Ruth Jones as masochist scapegoat Linda. The flat delivery and perpetual look of confusion sparks laughter with almost no effort.

Jacques: “There’s room for fun. We’ve all got a clown inside us sometimes.”
Jill: “I’ve never done it with a clown.”
Linda: “I have.”

Really really really not safe for work! I’m not a fan of sex & vomit humor. I can take about as much as Green Wing before I switch off. This show is chalk full of it. While you have some hilarious clean scenes, like the entire scenario of pretending Terry is dead and staging a funeral for him, complete with horseback riding and interpretive dance, there’s also every kind of sex joke you can imagine and some you can’t (insemination of kidneys & beans lunch, for example). While there’s very little actual nudity or sex, by season 2 episode 4 when Jill’s trying to steal the (non-existent) semen out of Cathy’s ten-year-old son’s bedroom after sending Linda over to live nude model in front of him, it’s time to switch off.

Season 2 takes a big turn. Cathy and Don are now at The Trees, a religious home where they are trying to sort out their marital problems. Although Jill is now married to Glenn Bulb (falsely believing she’d strangled Terry to death), she’s still after Don. I don’t think any of us would be surprised if Don wound up like Terry in 15 years, thrown out with the rubbish (quite literally).

Ultimately, it is very well-written. The gags are great. If you like dirty humor, you’ll love Nighty Night. If you’re squeamish, you should probably just watch season 1.

Jaime Pond is the editor of Anglonerd. She lives and works in NYC. Follow her on Twitter.