Trigger Warning is a collection of short stories by Neil Gaiman. Most interesting about the breadth of this volume is the variety of narrators, many of whom are unreliable or not making clear their identity up front: the points of view of an imaginary friend, a genie in a bottle, a killer, or a living statue.

In some ways, this book reads like Neil Gaiman was given the same assignments you’re given in basic creative writing courses. “Write a story in letter format.” This becomes a love letter from a living statue. “Write a well-known story or fairy tale from a different perspective.” This becomes a much scarier version of Sleeping Beauty where sleep is a plague. “Write a story where we only get one side of a conversation.” This becomes the answers (but not the questions) in an interrogation in The Girl Who Glowed, probably my favorite story in the book. 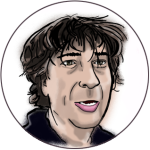 Neil Gaiman is the author of many short stories and novels, from the fantastical to the spooky. His books, like Stardust and  MirrorMask, have been adapted for film, and books like American Gods adapted for TV. @neilhimself

Although there are plenty of stand-alone pieces that are great for any lover of fiction, this is a particularly good book for nerds. Here, you get The Man Who Forgot Ray Bradbury, my, er, other favorite story; a long Sherlock Holmes piece about how Sherlock tended to bees for years in order to investigate something for Mycroft on his deathbed; a fantastic Doctor Who story with Eleven and Amy Pond, which has all the stampings of a typical Who story, with a scary monster, time travel, and the Doctor defeating it by making it defeat itself; a David Bowie genesis story; and a story about Shadow Moon for fans of American Gods.

“Disturbances,” as the stories are referred to on the cover, is the best way to describe these pieces, as many of them are about ghosts or monsters or the horrors of being human. They are largely not kid stories, though Click Clack the Rattle Bag makes a nice Halloween story.

Jaime Pond is the editor of Anglonerd. She lives and works in NYC. Follow her on Twitter.